Aruba is between the two extremes, in a desert landscape where the cacti can grow to the height of a man, enormous tumbles of boulders stand like the legacy of some ancient, angry god. Winding roads twist through rocky passes and hidden coves. Green parakeets sing to their mates, and orioles flash brilliant orange against the vast deep blue of the Caribbean sky. 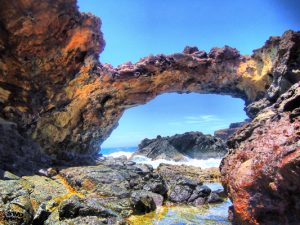 This is not the Caribbean as usual. This is Aruba…

The beaches curve along the western shores, soft, white sand fringed with palm trees, gently bowing toward the calm and transparent turquoise of mysteries of the Caribbean.

Perhaps the best way to discover what Aruba is about is to start at the beginning.

Aruba’s earliest indigenous inhabitants were the Caquetios Indians from the Arawak tribe. Fragments of the earliest known Indian 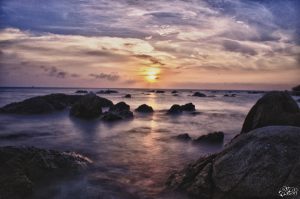 settlements date back to about 1000 A.D. Their artwork dates just as far back and are still visible on our limestone caves Spanish explorer Alonso de Ojeda is thought to have arrived some centuries later in about 1499. The Spanish promptly exported the Indians to Santo Domingo, where they were put to work in the copper mines.

During the years that followed, ownership of the island changed hands several times. In 1636, near the climax of the Eighty Years’ War between Spain and Holland, the Dutch took over and remained in control for nearly two centuries. In 1805, during the Napoleonic Wars, the English briefly took control over the island, but later returned to Dutch control in 1816.